A bridge is a Layer 2 device that connects two Layer 2 (i.e. Ethernet) segments together. Frames between the two segments are forwarded based on the Layer 2 addresses (i.e. MAC addresses). Although the two words are still often used in different contexts, a bridge is effectively a switch and all the confusion started 20+ years ago for marketing purposes.

Switching was just a fancy name for bridging, and that was a 1980s technology – or so the thinking went.

A bridge makes forwarding decisions based on the MAC address table. Bridge learns MAC addresses by looking into the Frames headers of communicating hosts.

A bridge can be a physical device or implemented entirely in software. Linux kernel is able to perform bridging since 1999. By creating a bridge, you can connect multiple physical or virtual interfaces into a single Layer 2 segment. A bridge that connects two physical interfaces on a Linux host effectively turns this host into a physical switch.

Switches have meanwhile became specialized physical devices and software bridging had almost lost its place. However, with the advent of virtualization, virtual machines running on physical hosts required Layer 2 connection to the physical network and other VMs. Linux bridging provided a well proven technology and entered it’s Renaissance. A bridge can connect virtual Ethernet interfaceswith each other or virtual Ethernet interfaces with a physical Ethernet device, connecting them into a single Layer 2 device. 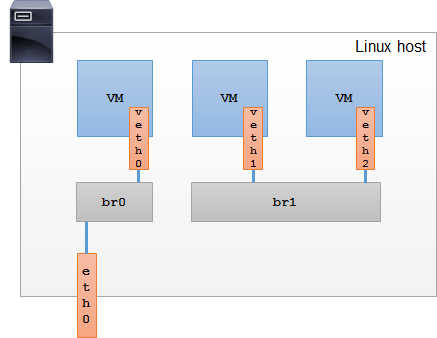 You can verify the bridge configuration of your Linux host with the brctl utility which is part of the bridge-utils package on most distributions.

Bridges have potential to create Layer 2 loops, so you have an option to run STP if required.

Macvlan, MACVLAN or MAC-VLAN allows you to configure multiple Layer 2 (i.e. Ethernet MAC) addresses on a single physical interface. Macvlan allows you to configure sub-interfaces (also termed slave devices) of a parent, physical Ethernet interface (also termed upper device), each with its own unique (randomly generated) MAC address, and consequently its own IP address. Applications, VMs and containers can then bind to a specific sub-interface to connect directly to the physical network, using their own MAC and IP address.

Each sub-interface can be in one of 4 modes that affect possible traffic flows. 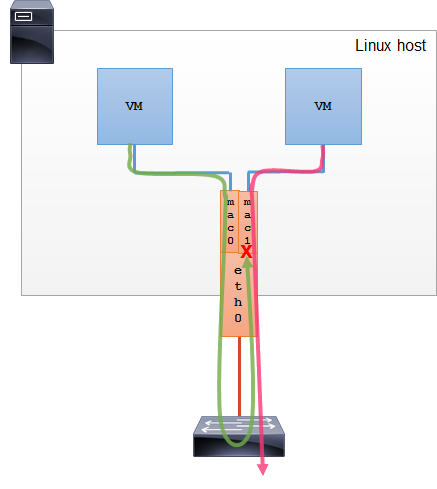 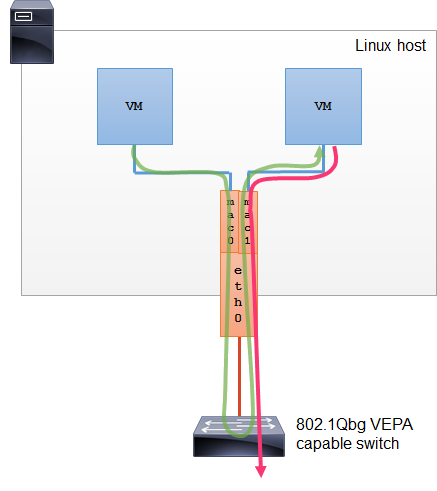 Macvlan connects all sub-interfaces on a parent interface with a simple bridge. Frames from one interface to another one get delivered directly and are not sent out. Broadcast frames get flooded to all other bridge ports and to the external interface, but when they come back from a VEP switch, they are discarded. Since all macvlan sub-interface  MAC addresses are known, macvlan bridge mode does not require MAC learning and does not need STP. Bridge mode provides fastest communication between the VMs, but has a “flaw” you should be aware of – if parent interface state goes down, so do all macvlan sub-interfaces. VMs will not be able to communicate with each other when physical interfaces gets disconnected. 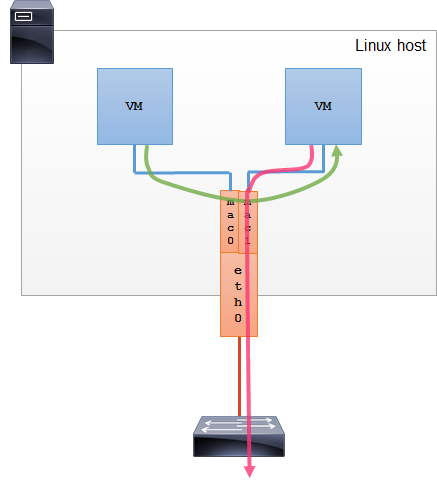 Allows a single VM to be connected directly to the physical interface. The advantage of this mode is that VM is then able to change MAC address and other interface parameters. 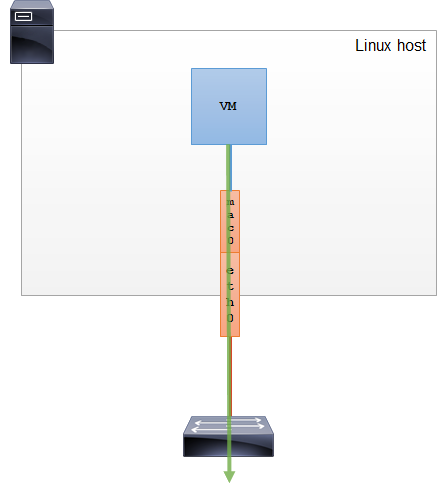 9 comments for “Bridge vs Macvlan”